The college football season is in full swing and the coaching carousel has been spinning. The latest rumors have Alabama’s Nick Saban set to retire from coaching, opening up a potential top head coaching job for the right candidate. With the help of Athlon Sports’ editors, we’ve put together a ranking of what they believe are the top 20 head coach jobs in college football.
The big question here isn’t whether the Crimson Tide has the best coaching job in college football, but rather if it’s the best coaching gig of all Power 5 programs (and maybe even all pro sports teams). The answer to that first part? Yes. Yes, it is.

Since 2007, Alabama has lost a total of 20 games (12 regular season and postseason combined), and outside of two national championships apiece for the Crimson Tide and LSU Tigers, no school has won more BCS or College Football Playoff crowns during that span. The king — excuse me — the emperor on campus in Tuscaloosa is Nick Saban, and despite a couple of hiccups in the past nine months, he has cemented his place among the sport’s coaching elite. No one would blame him if he decided it was time to leave — at least for a little while — but right now no other job opening could possibly be as appealing as what he has in Alabama.

The only thing that could potentially keep Saban in Tuscaloosa beyond his current contract, which runs through 2024, is if he decides to finally pursue a return to the NFL, but even then it’s hard to see him leaving for just any organization. So unless something drastic changes in the next few seasons, this job figures to remain at the top of a short list that includes a couple other SEC schools and maybe a few others in major conferences. 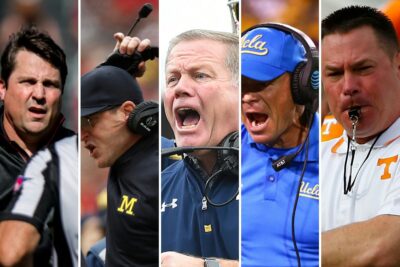 If there is a college football program with more resources than Alabama, it’s LSU. The Tigers have been an annual fixture in the top 15 since Nick Saban arrived from Baton Rouge in 2000. They’ve won a National Championship (2007) and played for another (2003). And most importantly, they’ve entered every season since Saban’s arrival with at least as good a chance as anyone else of winning the national title.

Yes, LSU has had its share of disappointments — 2007 against Florida and 2011 vs. Alabama come to mind. In the past 10 seasons, LSU has lost a total of nine regular season games. Only twice have those defeats come against unranked foes (2007 to No. 21 Kentucky and 2008 to No. 12 Arkansas). On one hand that’s a sign of just how good this program has been during the past decade, especially when you consider that Alabama has lost 14 games during that same stretch. But on the other, the Tigers always seem to underachieve, especially in recent years.

The one thing all of those losses have in common is an inability to find a capable quarterback under center. It’s yet another position Saban excels at producing NFL players, but once they leave for the next level, LSU has typically failed to adequately replace them. Despite being limited by the coaching changes that have occurred since 2010, Les Miles has done a commendable job of making sure his program is still in the mix every year. The Tigers are coming off back-to-back trips to New Year’s Six bowls under Ed Orgeron and figure to be a factor once again in 2017 and beyond. LSU has many of the pieces it needs to win another national title as early as next year, but whether it finally does remains to be seen.

That Urban Meyer has found success at Ohio State is nothing new; what’s more interesting is how he’s done it. While he has built winners everywhere he’s been, none of his previous stops have started out on top. His first year at Bowling Green saw the Falcons go 3-9 in 2001. At Utah, they finished 8-5. Meyer moved to Florida in 2005 and promptly went 7-5 before winning the ’06 national championship with a 13-1 record.

The Buckeyes were coming off the Jim Tressel era, so it wasn’t as if Meyer was getting thrown into a complete rebuild, but he had to reset expectations. What makes Ohio State unique is that under Meyer, expectations haven’t changed.