Extreme levels of flood danger were announced in the northwestern part of Spain. So far, more than 20,000 hectares of land have been burned, according to local authorities, which is expected to increase further. Firefighters are rushing to put out the blaze due to dry weather. News Reuters.

Many areas in the north-west are on fire. Hector after hectare of land is burning. The fires have been raging for several days due to the terrible heat caused before the onset of summer.

More than 20,000 hectares of forest have been burnt to ashes in the fire so far. Authorities in the area have instructed locals to evacuate to avoid an accident.

The army has also started work to put out the fire. 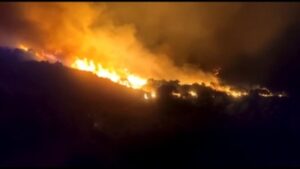 In this situation, many people think that only rain is the last hope to put out the fire.

Before the start of summer, the temperature in Spain exceeded the maximum of 43 degrees Celsius. Authorities evacuated the park to avoid an accident as a fire broke out near the du Foam theme park in southwestern Madrid.

Several members of the fire brigade reportedly injured in the blaze.

Before the onset of summer, European countries, including Spain, are in the grip of a terrible heat wave. Experts are blaming the adverse effects of climate change for this situation.

A local said, “We are here to visit. But it’s so hot here that we’re getting restless. The throat is getting dry one after another. So I am drinking cold water once again. ‘

Some parts of Spain are seeing their warmest month of May, according to the Spanish Meteorological Agency EMAT. Temperatures above 40 degrees Celsius have  recorded in some places.

The meteorological agency issued heatwave warnings in 10 areas on Saturday. That being said, it would be the ‘most intense’ heat wave of the year.

In addition, several states in the United States are in the grip of intense heat. Meanwhile, temperatures in the country’s southeast have hit record highs.

Spain, meanwhile, is another hotspot. According to the country’s meteorological department, the temperature is 16 degrees Celsius higher than normal this year.

Experts are blaming climate change as the reason for rising temperatures in the country.🔱